Functions of a Polysaccharide

Depending on their structure, polysaccharides can have a wide variety of functions in nature. Some polysaccharides are used for storing energy, some for sending cellular messages, and others for providing support to cells and tissues.

Many polysaccharides become glycoconjugates when they become covalently bonded to proteins or lipids. Glycolipids and glycoproteins can be used to send signals between and within cells. Proteins headed for a specific organelle may be “tagged” by certain polysaccharides that help the cell move it to a specific organelle. The polysaccharides can be identified by special proteins, which then help bind the protein, vesicle, or other substance to a microtubule. The system of microtubules and associated proteins within cells can take any substance to its destined location once tagged by specific polysaccharides. Further, multi-cellular organisms have immune systems driven by the recognition of glycoproteins on the surface of cells. The cells of a single organisms will produce specific polysaccharides to adorn its cells with. When the immune system recognizes other polysaccharides and different glycoproteins, it is set into action, and destroys the invading cells.

By far one of the largest roles of polysaccharides is that of support. All plants on Earth are supported, in part, by the polysaccharide cellulose. Other organisms, like insects and fungi, use chitin to support the extracellular matrix around their cells. A polysaccharide can be mixed with any number of other components to create tissues that are more rigid, less rigid, or even materials with special properties. Between chitin and cellulose, both polysaccharides made of glucose monosaccharides, hundreds of billions of tons are created by living organisms every year. Everything from the wood in trees, to the shells of sea creatures is produced by some form of polysaccharide. Simply by rearranging the structure, polysaccharides can go from storage molecules to much stronger fibrous molecules. The ring structure of most monosaccharides aids this process, as seen below.

Structure of a Polysaccharide

The structure of the molecules being combined determines the structures and properties of the resulting polysaccharide. The complex interaction between their hydroxyl groups (OH), other side groups, the configurations of the molecules, and the enzymes involved all affect the resulting polysaccharide produced. A polysaccharide used for energy storage will give easy access to the monosaccharides, while maintaining a compact structure. A polysaccharide used for support is usually assembled as a long chain of monosaccharides, which acts as a fiber. Many fibers together produce hydrogen bonds between fibers that strengthen the overall structure of the material, as seen in the image below. 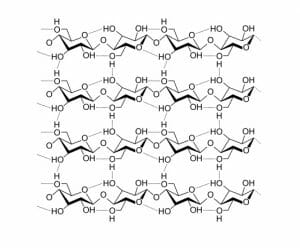 The glycosidic bonds between monosaccharides consist of an oxygen molecule bridging two carbon rings. The bond is formed when a Hydroxyl group is lost from the carbon of one molecule, while the hydrogen is lost by the hydroxyl group of another monosaccharide. The carbon on the first molecule will substitute the oxygen from the second molecule as its own, and glycosidic bond is formed. Because two molecules of hydrogen and one oxygen is expelled, the reaction produced a water molecule as well. This type of reaction is called a dehydration reaction as water is removed from the reactants.

Examples of a Polysaccharide

Cellulose and chitin are both structural polysaccharides that consist of many thousand glucose monomers combined in long fibers. The only difference between the two polysaccharides are the side-chains attached to the carbon rings of the monosaccharides. In chitin, the glucose monosaccharides have been modified with a group containing more carbon, nitrogen, and oxygen. The side chain creates a dipole, which increases hydrogen bonding. While cellulose can produce hard structures like wood, chitin can produce even harder structures, like shell, limestone and even marble when compressed.

Both polysaccharides form as long, linear chains. These chains form long fibers, which are deposited outside the cell membrane. Certain proteins and other factors help the fibers weave into a complex shape, which is held in place by hydrogen bonds between side chains. Thus, simple molecules of glucose that were once used for energy storage can be converted into molecules with structural rigidity. The only difference between the structural polysaccharides and storage polysaccharides are the monosaccharides used. By changing the configuration of glucose molecules, instead of a structural polysaccharide, the molecule will branch and store many more bonds in a smaller space. The only difference between cellulose and starch is the configuration of the glucose used.

Probably the most important storage polysaccharides on the planet, glycogen and starch are produced by animals and plants, respectively. These polysaccharides are formed from a central starting point, and spiral outward, due to their complex branching patterns. With the help of various proteins that attach to individual polysaccharides, the large branched molecules form granules, or clusters. This can be seen in the image below of glycogen molecules and the associated proteins, seen in the middle. 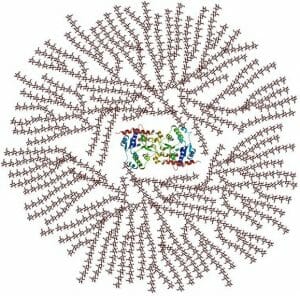 When a glycogen or starch molecule is broken down, the enzymes responsible start at the ends furthest from the center. This is important, as you will notice that because of the extensive branching there are only 2 starting points, but many ends. This means the monosaccharides can be quickly extracted from the polysaccharide and be utilized for energy. The only difference between starch and glycogen is the number of branches that occur per molecule. This is caused by different parts of the monosaccharides forming bonds, and different enzymes acting on the molecules. In glycogen a branch occurs every 12 or so residues, while in starch a branch occurs only every 30 residues.

you may also lile this

Is penicillin a strong antibiotic?

White hair a link with immunity?

What macronutrients do to our body?