Every time we mix a substance with a solvent , we can have several results. The determining factor to obtain these results is the solubility of the substance, which is defined as the maximum possible concentration of the solute. Solubility rules help determine which substances are soluble and to what extent. The degree of solubility can vary widely depending on the substances , and can range from infinitely soluble or totally miscible substances , such as ethanol in water, to poorly soluble , such as silver chloride in water. 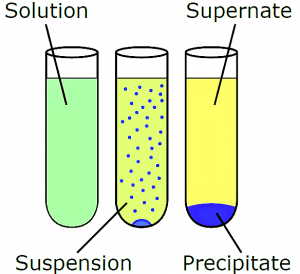 It is the degree to which a substance can be dissolved in a solvent to form a solution , which is generally expressed in grams of solute per liter of solvent .

Solubility is a measure that has the ability of a certain substance to be able to dissolve in another. The substance that dissolves is then known by the name of solute , while the substance in which it dissolves is called a solvent or solvent . When we talk about solubility we also talk about concentration , which refers to the ratio that exists between the amount of solute and the amount of solvent in a solution . It can be expressed through the percentage of solute or in units such as moles per liter orgrams per liter. It is important to note that not all substances dissolve in the same solvents.

Many of the properties that solutions have depend mainly on the concentration of the solutions and when a solute is added to a solvent , some physical properties of the solvent are altered. Some of these properties are as follows:

When a solid or a liquid dissolves, the molecules separate and the space between them is occupied by a molecule of the solvent . During this process, energy must be added to overcome the intermolecular forces , which arise from the union between solute particles and solvent molecules. In the dissolution process, each ion is surrounded by several molecules of the solvent and a solvent in order to dissolve the ionic compounds needs to have a high dielectric constant, in other words, it must have very insulating properties. to reduce the attraction between the ions of opposite charge once they are solvated.

Among the different factors that can affect the solubility of a substance, we can mention the following:

There are three different types of solubility, these are

It helps us to designate and to quantitatively express the concentration of solutions. In addition, it measures the dissolution capacity of the different substances that make up the compounds.

Some examples that we can observe of the solubility of substances are the following: