Arnold Sommerfeld was a famous atomic mathematician and physicist known primarily for his work on atomic theory in the field of quantum mechanics and for mentoring more Nobel Laureates in physics than any other physicist. Sommerfeld discovered that in some atoms, electrons managed to reach speeds very close to the speed of light, so he chose to base his analysis on relativistic theory . This decision was full of intrigue and controversy at the time, because the theory of relativity had not yet been accepted in the scientific community. 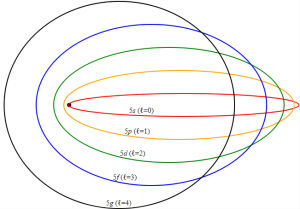 What is Sommerfeld’s atomic model?

The atomic model Sommerfeld is a better version of the model Bohr , which explains the way in which they behave electrons through different levels of energy that exist within the atom giving rise to the modeling of the atom.

What is the Sommerfeld atomic model?

Sommerfeld’s atomic model consists of explaining the behavior of electrons , stating that within the same energy level there could be different energy sublevels , which caused different energy variations to occur at the same level. He also explained that the speeds of electrons were close to the speed of light, which is why he studied electrons from a relativistic perspective .

He made two basic modifications, one was that electrons could describe quasi-elliptical orbits , and the other was that electrons had relativistic speeds . According to his model, the electrons were spinning only in a circular fashion . A centric orbit gave rise to a new quantum number which was called Azimuthal quantum number , and which would delimit the shape of the orbitals, and would be represented by the letter l, taking variable values ​​from 0 to n-1.

In this way the orbits according to Sommerfeld’s atomic model are:

The main characteristics of Sommerfeld’s atomic model are the following:

This model postulates the following:

Sommerfeld’s main contribution was to conclude the difference of energy that exists between the electrons , regardless of whether they were in the same energy level was caused to the existence of energy sublevels within each level.

Sommerfeld relied on Coulomb’s Law to ensure that if an electron was subjected to a force inversely proportional to the square of the distance, the trajectory described should be elliptical and that it did not always have to be circular .

He used Einstein’s theory of relativity to treat electrons differently, and thus be able to evaluate their behavior based on the speeds reached by these fundamental particles.

The main problem with Sommerfeld’s atomic model was that it took a particle with a certain trajectory around the nucleus , however, the proper conception of the trajectory of the electrons in the atom is obsolete. Furthermore, the model failed to explain the emission form of elliptical orbits , and only worked with circular orbits .

Sommerfeld made important contributions to the mathematical theory of diffraction . His most important contribution is considered to have been his atomic model . In 1915, Sommerfeld considered the existence of elliptical orbits in addition to the circular orbits of the Bohr model and took into consideration that electrons in some atoms could move at relativistic speeds .

Ternary salts: what are they, nomenclature, properties, examples