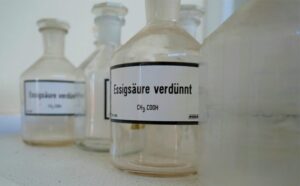 A strong acid is that type of chemical species that has the great ability to lose an H + proton.  Is an acid which is fully dissociated or ionized when in a solution -type aqueous .

Among the most notable characteristics that can be found in a strong acid are the following:

How to determine the strength of an acid

How it differs from a concentrated acid

The difference is that a strong acid can decompose almost completely when it is in a clear solution , this because it gains electrons . A concentrated acid, on the other hand, has a certain concentration limit in water and does not mix with other components that could lead to a reduction in its concentration. Concentrated acid is that which is in its maximum concentration in water.

Strong acids are of special importance mainly in the field of industry . They are necessary to be able to manufacture different types of cleaning products and are even used in the production of steel . Some of them also have a fundamental role in the manufacture of dyes , fertilizers and even in the manufacture of explosives . They are the primary medium for creating household and drain cleaners . It is also be the main component in the production of fuel for rockets .

What is the strongest acid in the world

The strongest acid in the world is a super acid and goes by the name fluoro antimonic . It has a chemical formula of HSbF6 and can be obtained by mixing hydrogen fluoride with antimony pentafluoride . It is a strong acid that has the ability to decompose very quickly and explosively when it comes into contact with water, for this reason it can only be used in hydrofluoric acid solutions .

It can evolve forming vapors that turn out to be highly toxic and when the temperature increases it manages to decompose and produce hydrogen fluoride gas . This acid is much stronger than sulfuric acid, it can even dissolve glass. Despite being extremely dangerous and toxic, it is used in the field of chemical and organic engineering in order to be able to protonate organic compounds . It is also used as a type of catalyst for alkylations and acylations in the petrochemical field.

Other examples of strong acids

In the field of chemistry it is possible to find the following examples of strong acids:

As for the examples, it is important to mention that there are also super strong acids, and some examples of them are: