In chemistry , many compounds of type organic important which result from the binding that occurs between carbon atoms and hydrogen. One of these compounds is known by the name of styrene , which is widely used as a raw material in the production of a large number of homopolymers and copolymers which also have impressive properties in industries. 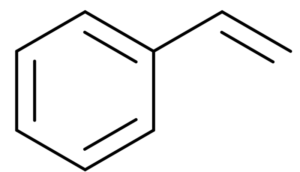 The styrene is a type of chemical compound which comprises a benzene ring . It is a liquid that has no color and that can evaporate very easily, used mainly in the manufacture of plastics and rubber .

Among the main characteristics found in styrene we find the following:

The discovery of styrene is credited to Newman in 1786 . After inventing it, many experiments were carried out using the compound and in 1839 , the first processes of polymerizing it began , although many of them failed. The first man to carry out the process effectively and positively was Herman Staudinger , who later explained the procedure by formulating a theory that became known as the Polymerization Theory . This even made him the recipient of a Nobel Prize in Chemistry in 1930.

It was a widely used compound throughout the Second World War as a substitute for other materials and in the 50’s they began to make more resistant materials used in styrene. By the end of the 20th century , more than 9 million metric tons of this compound were produced worldwide, which was and is used in the field of industry and construction .

Styrene was discovered by Newman in 1786.

Styrene has several important physical and chemical properties, including the following:

The structural formula of styrene is as follows:

The chemical structure of styrene is made up of an ethene molecule in which one of the hydrogen molecules is replaced by a phenyl group. It also conserves the carbon-carbon double bond that ethene provides. The double bond that makes it up, causes electrons to be present in abundant quantities, which makes it a very reactive molecule.

What is styrene for?

It is also widely used in the manufacture of containers that are used to store food and in the coatings of some objects such as carpets. It is also a widely used material in the construction field as it is the main component of several types of insulators that are used in the insulation of houses, in fiberglass and in electrical insulation, such as in some kitchen utensils. and in electrical cables.

Styrene is a chemical compound that can cause various adverse effects when it comes into contact with humans. When workers or people are exposed to it, effects related mainly to the central nervous system can occur , such as vision problems, excessive tiredness, decreased ability to react, problems concentrating and imbalance.

It has been shown that animals that have been exposed for long periods to this compound have suffered hearing loss , decreased sense of smell and serious problems in the liver . In addition, it is considered a compound capable of producing cancer.

How to get styrene

The obtaining of styrene is carried out in the chemical industry and to achieve this, ethylene and benzene are used through polymerization , a process that occurs gradually and lasts at room temperature. The speed of this process can be increased when the temperature is increased.

What is silicon carbide?

What is the carbonyl group?

Watch Glass | What are the Types, Uses, functions & Applications?