The subatomic particles , also called particles elementary , are any of the various units self – contained of matter or energy that are the fundamental constituents of the whole material . Subatomic particles include electrons , the negatively charged, nearly massless particles that nonetheless account for most of the size of the atom, and include the heavier building blocks of the atom’s small but very dense nucleus, the positively charged protons, and the electrically neutral neutrons. But these basic atomic components are by no means the only known subatomic particles. 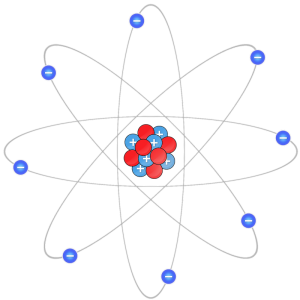 They are particles smaller than atoms and can be elementary or made up of other subatomic particles, such as electrons , protons and neutrons which are made up of quarks .

The idea that all matter is composed of elementary particles dates back to at least the 6th century BC. C . The philosophical doctrine of atomism and the nature of elementary particles were studied by ancient Greek philosophers such as Leucippus, Democritus, and Epicurus ; ancient Indian philosophers like Kanada, Dignāga and Dharmakirti; Muslim scientists such as Ibn al-Haytham, Ibn Sina, and Mohammad al-Ghazali; and in early modern Europe by physicists like Pierre Gassendi, Robert Boyle, and Isaac Newton .

Those early ideas were founded through abstract and philosophical reasoning rather than empirical observation and experimentation and represented a single line of thought. In the 19th century, John Dalton , with his work on stoichiometry , concluded that each chemical element was composed of only one type of particle. Dalton and his contemporaries believed that these were the fundamental particles of nature and therefore called them atoms , after the Greek word atoms, which means indivisible.

When we refer to the word models we are talking about a representation or diagram in a graphic way that works as a reference to understand something more easily and when we refer to the word atomic , we are talking about concepts related to atoms . Then we can say that atomic models are a graphical representation of the structure having the atoms . An atomic model gives us an explanation or scheme of what atoms are like and how they behave. The atomic models are:

What are subatomic particles

The subatomic particles are as follows:

The elementary subatomic particles are:

The most outstanding characteristics of subatomic particles are:

Some examples of subatomic particles are as follows:

What is Charles’s law?