In nature, it is common to find a series of changes in the states of matter which turn out to be quite frequent. Bodies can change from one state to another depending on many occasions on temperature and pressure . One of these changes can occur through sublimation , a process through which matter can be transformed directly from a solid state to a gas . 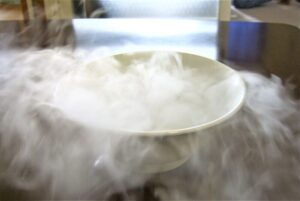 The sublimation is a type of change chemical that occurs when the material is in solid state changes immediately passing a gaseous state , without having the need to go through an intermediate stage of liquid .

In the field of chemistry , sublimation is a process by which a substance that is in a solid state can pass to the gaseous state , a process that can be carried out without first having to go through the liquid state of the subject. This concept is also used to name an opposite method known as inverse sublimation which consists of the direct passage that occurs between the gaseous state and the solid.

It is a fairly frequent process that can be observed mainly in the water cycle. It is a transformation that the material that it needs to be able to give itself, the force of the caloric energy to be able to achieve a variable point depending on the nature of the matter, what we know by the name of sublimation point can undergo .

Sublimation is a process that occurs at temperatures and pressures below what is called the “triple point” of the substance. This type of process is an endothermic change , in other words, a change in which the system absorbs heat . It is also a thermodynamic process in which there is a change in state from a solid to a gas.

The way a solid behaves when it is under normal conditions is to be able to heat up to create a drop and then, little by little, the solid particles begin to melt completely. In sublimation, a type of bubble is formed progressively without the surface getting wet, and it is deposited or crystallized immediately.

There are several types of sublimation, among which the following are explained:

Sublimation is a process that can occur in any type of pure substance, this is due to the different conditions that may occur at higher pressures and when they are at lower temperatures that cause the transition.

The main consequence that occurs when sublimation occurs is the change of states , an element can then easily pass into a solid phase from a gaseous phase . It is important to mention that this consequence only affects the physical part of the state of matter and not the chemical part .

Is sublimation endothermic or exothermic?

Sublimation is a process by which heat is absorbed, which is why it is classified as an endothermic process . This heat is used as a form of energy to be able to make the change between the states and it is necessary to be able to maintain the process of the change of the substance.

Sublimation is a process that has many uses and for this reason it is of utmost importance for humans and for nature. Is used to reduce the amount of snow and ice, it is also used to purify the compounds of type organic , to reveal traces fingerprints on paper and is also used for different processes and printing techniques and patterns , such as those they are seen in dye sublimation. In addition, it is important because through it you can preserve food through a process called lyophilization.

Some examples of chemical sublimation are mentioned below: