A chemical compound is a chemical substance made up of two or more different chemical elements that are joined chemically, with a fixed proportion that establishes their composition . An example of these compounds is known by the name of sulfuric acid , a chemical product that is well known mainly within the field of industry and worldwide. 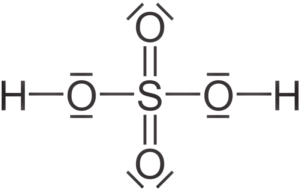 Sulfuric acid is a type of chemical compound widely used and known worldwide that has a high corrosion power and that can be obtained by a series of chemical procedures within a laboratory based on sulfur dioxide .

Among the main characteristics that can be observed in sulfuric acid, the following are mentioned:

The origins of sulfuric acid can be traced back to the 8th century thanks to Jabir ibn Hayyan . Subsequently, the acid was further studied in the 9th century by Ibn Zakariya al-Razi, who was an alchemist . In medieval Europe , it was known by the name of vitrolium oil , a word that meant “crystal” and was used to refer to the appearance of sulfate salts.

As early as the 17th century , Johann Glauber , a German-Dutch chemist, managed to produce sulfuric acid as such, when he mixed potassium nitrate with sulfur in a medium with steam . In 1763 , Joshua Ward , a London pharmacist, used this same method to begin mass- producing the product. By the eighteenth century , after several attempts to produce greater quantities, it managed to make a distillation process in dry by burning the iron disulfide with iron sulfateat a temperature of 480 °, which resulted in sulfuric acid in any concentration. In 1831 , a better and faster process to produce sulfuric acid was patented thanks to Peregrine Phillips , and until now, this is the method that is used.

The structure of sulfuric acid is pyramidal . It has a sulfur atom that is located in the central part and the oxygen atoms are located in each of its vertices and the remaining two parts correspond to the hydrogen atoms . 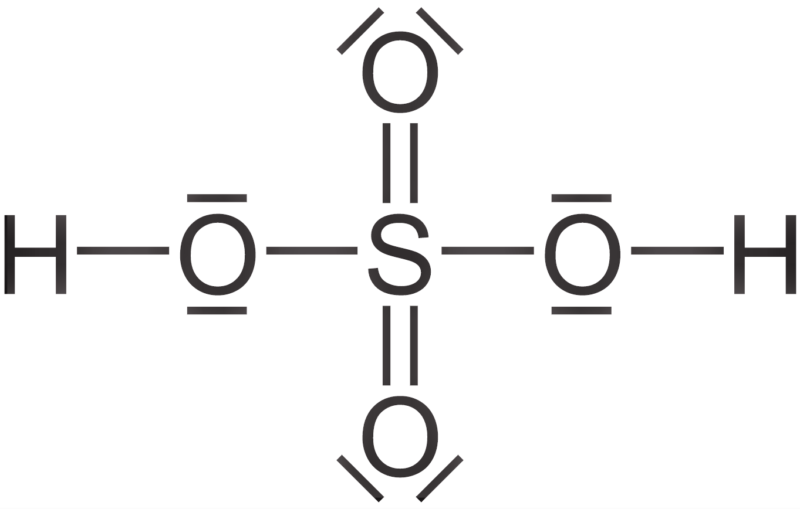 Its standard chemical formula is H 2 SO 4 , which indicates that two hydrogen atoms, one sulfur atom, and four oxygen atoms can be found in the compound.

The main physical properties of sulfuric acid are as follows:

Among its main properties that can be found in sulfuric acid are the following:

Sulfuric acid can be created in different types of concentrations and degrees of purity. There are two main methods by which this type of acid can be produced:

The main use that is given to this type of acid is in the petrochemical and chemical industry , mainly in the production of fertilizers and in the petroleum refining processes , manufacture of explosives , plastics and detergents . Regarding fertilizers, their use is based on the production of phosphoric acid and some few quantities are also used to produce ammonium sulfate and superphosphates .

As for the petrochemical industry , sulfuric acid is used mainly as a reaction medium by which different types of organic processes such as condensation, nitration and dehydration can be carried out. It is used in the production of the acid hydrofluoric and hydrochloric and various processes related to the timber as the manufacture of chemical fiber and textile processes.

Its main benefits are presented in the field of industry , specifically in chemistry as it is a necessary product to create different types of chemicals. It is capable of chemically decomposing many materials and it turns out to be a good source of income for the countries where it is produced.

Concentrated sulfuric acid is extremely corrosive and can cause severe burns when not handled properly. This chemical product, in addition to producing chemical burns , produces secondary thermal burns as a consequence of the dehydration that it also produces. This dangerous chemical is capable of corroding skin , paper, metals, and even stone. If it comes into direct contact with the eyes, it can cause permanent blindness . If swallowed, it can cause internal burns, irreversible organ damage , and death .

Exposure to aerosols containing high concentrations of sulfuric acid can cause severe irritation to the eyes and respiratory tract, as well as tissue damage . When this exposure occurs consistently even at low concentrations, it can lead to erosion of a person’s teeth . When used in homes, it is common for it to be done to clean the drains , this type of acid has the same harmful effects so the correct instructions for its use must be followed to avoid possible risks.