The technetium is a chemical element symbol Tc and atomic number 43 . It was the first element artificially obtained in a cyclotron. It is also obtained as the main constituent of fission products in a nuclear reactor or, alternately. It is the lightest of the chemical elements and does not have stable isotopes . It is the first synthetic element that we can find in the periodic table. Its life is very short and it emits gamma rays . Most of the technetium produced on earth is obtained from the fission of 235 U in nuclear reactors and is extracted from nuclear fuel rods. It was the first element in the periodic table to be produced artificially. 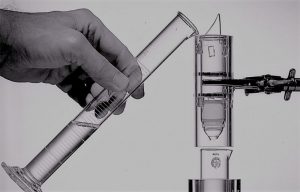 Technetium is the lightest of the chemical elements in the periodic table that do not have stable isotopes and is the first synthetic element in it. Its atomic number is 43 and its symbol is Tc.  Its chemical properties are intermediate, it is short-lived and emits gamma rays . It is the first element made artificially.

The Technetium was discovered by Carlo Perrier and Emilio Segre, both workers at the University of Palermo in Italy in 1937 and was conducted at the University of Palermo. Segre convinced the inventor of the cyclotron to give him some of the discarded parts of the cyclotron that had become radioactive particles . Earlier that year, Lawrence sent him a sheet of the element molybdenum.which was part of the cyclotron, Segre encouraged his partner Perrier to help him demonstrate that by means of comparative chemistry the activity of molybdenum was caused by an element with a Z of 43, which did not exist within nature due to its instability caused by nuclear decay. After several attempts, they managed to isolate three periods of disintegration . After the discoveries, the scientists wanted to call the new element Technétos , which means artificial . The name of this element comes from Latin and means artificial. For several years, there was an empty space between elements number 42 and 44 and it was Dimitri Mendeleev who predicted their properties before being discovered.

Uses and applications of technetium

Chemical use : It can be used as a catalyst, however, its radioactivity is the biggest problem when it comes to finding safe applications. It protects against corrosion by also using anions, which is why its use in boiling water reactors has been suggested.

It is also used in the industrial field to calibrate scientific equipment.

Despite all its positive uses, technetium is limited when it is going to be used indoors, this because it is an extremely dangerous radioactive material for humans.

What is a supersaturated solution?

What is litmus paper?