The atomic model of Thomson is considered as the first theoretical description regarding the internal structure of atoms and was proposed around 1900 by William Thomson who was strongly supported by Sir Joseph John Thomson , who had discovered the electron , a part negatively charged of each atom. Although Kelvin and others advanced various alternative models in the 1900s, Thomson argued that atoms were uniform spheres of matter that were positively charged and that electrons were embedded in them.. This model was very popularly known as the plum pudding model. 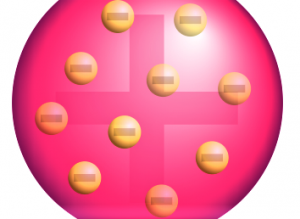 Also called “raisin pudding” , it was a model that explained that cathode rays did not have any type of charge, nor were they atoms , that they were fragments of atoms, or subatomic particles , to which he gave the name of electrons .

What does the Thomson atomic model consist of?

Thomson’s atomic model or raisin pudding as it was commonly known consisted of a theory that explained aspects of the structure of the atom . The model was proposed by Joseph John Thomson in 1897 and he said that it was composed of electrons having a charge negative and they were in a positive atom also stated that the electrons are distributed so uniformly around the atom . He also assumed that at certain times, instead of a negatively charged soup there could be apositively charged cloud .

In 1900, several experimental evidences had already originated that guaranteed the existence of electrons in atoms, such as the scattering of X-rays , the photoelectric effect and others. It was also known since atoms had a neutral charge . Since the mass of an electron is too small when compared to the atom, it was suggested that most of the mass is related to the positive charge. Thanks to these results, Thomson proposed an atomic model that said that the electrons were introduced into the interior of a uniform sphere that had a positive electric charge .

The main characteristics of Thomson’s atomic model are the following:

Thomson’s atomic model led to the discovery of the first subatomic particle , better known as the electron . It helped determine the relationship that exists with the charge of the mass of the electron. He also managed to demonstrate with the theory that inside the atom you can find a tiny particle that has a negative charge, which he called electrons . He also deduced that the atom was a sphere of matter that had a positive charge and that electrons were inside it.

Thomson did several experiments mainly with cathode ray tubes in order to test the properties that subatomic particles had and thus make the basis of his model. These tubes are made of glass and their air content has been practically completely emptied.

In his experiments he determined the deviation of the ray during its path from the cathode to the anode and then tried to validate the properties of electric charges and the reaction that occurs between them.

He carried out this experiment on different occasions, changing the metals he used in each of his experiments, until he managed to determine that the properties of the ray were maintained constantly. His studies helped to explain the structure of the molecules of some substances and the formation of chemical bonds .

In another of his experiments, he was able to determine the relationship between the charge and the mass of cathode rays, by measuring how much they are deflected by a magnetic field and the amount of energy they carry. He found that the charge / mass ratio was more than a thousand times higher than that of the Hydrogen ion, which gave him to understand that the particles are very light or highly charged .

The model turned out to be of much controversy to the community of scientists of the time since it was against what the atomic model of Dalton said. The problem was that Thomson did not include the existence of subatomic particles within the atom , such as electrons . Another of his problems was that he did not believe in the existence of the nucleus because he did not have knowledge regarding protons and neutrons .

The greatest importance of Thomson’s atomic model is that this was the first model that allowed a relationship between electricity and the atom to be made . He also indicated that the atom and electrons were wrapped in a soup that had a positive charge , something like a pudding. He also established that electrons were uniformly distributed throughout the atom.

What are carboxylic acids?