In the broad field of medicine there are a lot of important drugs, a group of them dedicated specifically to avoid the heavy bleeding . These drugs are known as antifibrinolytics and help promote and improve blood clotting. Among them we find tranexamic acid , an important drug that can actually save lives. 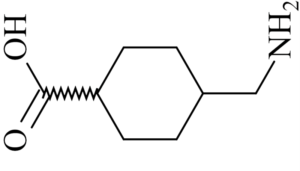 The tranexamic acid is a type of chemical used in the medical field with the main objective to neutralize the fibrinolysis by blocking plasmin . It is a substance that belongs to the group of antifibrinolytics .

The chemical structure of tranexamic acid is as follows: 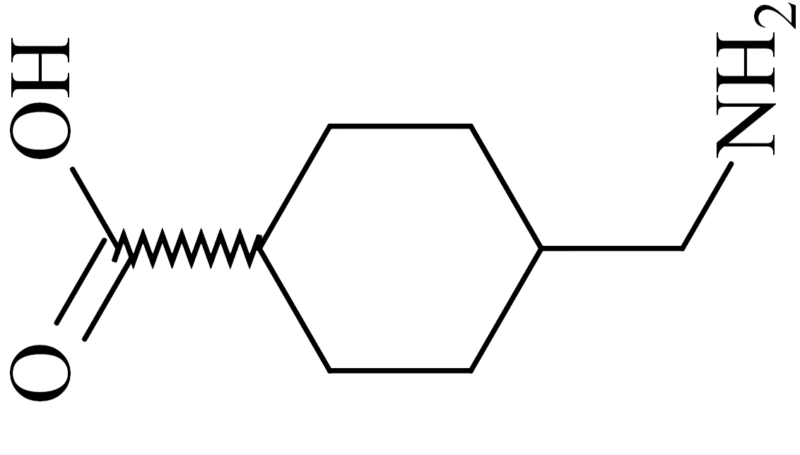 Its empirical formula is the following: C8H15NO2

According to the International Union of Pure and Applied Chemistry (IUPAC), its nomenclature is trans-4- (aminomethyl) -cyclohexanecarboxylic acid although it can also be found as cyklokapron and amchafibrin .

Its main physical properties are mentioned below:

With regard to chemical properties, the most important are the following:

Tranexamic acid is a man-made form of an amino acid (protein) called lysine , in other words, it can be obtained in chemical laboratories through a number of different processes. One of these processes can be by starting from acetamidomethylbenzoic acid when it is heated to approximately 120-200 ° C under a pressure of 40-100 atm for about 8-16 hours.

It can also be manufactured from P-aminomethylbenzoic acid by means of hydrogenation at a temperature of 10-250 ° C under hydrogen pressure of approximately 10-200 atm. Finally, it can also create from acid P-aminomethylbenzoic with catalyst of metal ruthenium in the presence of a hydrogen pressure of 50-200 Kg / cm and a temperature of 90-200 ° C. It is important to mention that for all these manufacturing processes exposure to high temperatures and high pressures is necessary .

What is tranexamic acid for?

The main use that is given to tranexamic acid is to be able to stop abundant and uncontrolled bleeding in women who have problems during the menstruation cycle because it works by improving blood clotting, it is also the ideal medicine when bleeding problems occur during postpartum .

It is a drug that can also be used in patients suffering from hemophilia who must undergo surgery for some reason . It works well as a treatment for hereditary angioneurotic edema and in cases of bleeding caused by a thrombolytic .

Recently, this acid has begun to be used in the fields of beauty , dermatology and aesthetic medicine as experts have discovered that, in addition to stopping bleeding, it also has the ability to reduce spots on the skin caused by exposure to the sun. , freckles and chloasma among others.

How is it taken

In cases of metrorrhagia , heavy bleeding during menstruation, a low dose of 1 gram every 8 hours for four days is usually recommended . In case of very heavy bleeding, this dose could be increased following the doctor’s prescription up to 4 grams per day . In addition, the drug can be taken orally or parenterally.

Its main benefit implies that heavy and heavy bleeding can be stopped as the drug has the ability to break down the heavy clots that occur during bleeding. It is very beneficial when it is necessary to stop a bleeding that has been caused by surgeries , menorrhagia , severe epistaxis or severe nosebleeds , cervical surgeries , eye bleeds and bleeding after tooth extraction in patients suffering from hemophilia .

Another of its benefits that has been discovered very recently is the great benefit it provides in reducing spots on the skin, mainly melasmas, which can be caused by a series of different factors. In the field of dermatology, it is being used in combination with other types of procedures, producing very positive effects in the field.

The main risks that exist with the use of tranexamic acid are the following:

What is column chromatography?