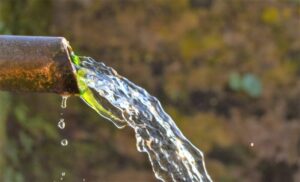 What is a water molecule?

The water molecule is a type of compound composed of two atoms of hydrogen and one atom of oxygen which can be joined by a link type covalent to thereby be able to share their electrons .

Characteristics of the water molecule

Among the main characteristics that can be observed and found in the water molecule are the following:

The molecular structure having the water molecule is very easy and is composed of two atoms of hydrogen and one oxygen atom . Hydrogen atoms are attached to the oxygen by means of covalent bonds using a pair of electrons link . In the structure, oxygen has two pairs of electrons which do not fulfill a bonding function .

The oxygen atom is then surrounded by four pairs of electrons , two pairs are part of the covalent bonds attached to hydrogen atoms and two more pairs that are not shared. In addition, the water molecule is polar , in other words, in it it is possible to find a very irregular distribution in the density of its electrons .

The elements that make up the water molecule are two: the hydrogen atoms that have a positive electric charge and the oxygen atom which has a positive charge.

How it is formed?

A water molecule is made up of two hydrogen atoms and one oxygen atoms . But you can’t just take two hydrogen atoms and glue them to an oxygen atom, but for that, you need a slightly more complicated real reaction : 2H2 + O2 = 2H2O + Energy . To produce two molecules of water (H2O), it is necessary to combine two molecules of diatomic hydrogen (H2) with one molecule of diatomic oxygen (O2) and energy is released in the process .

Physical properties of the water molecule

Its main physical properties are mentioned below:

Regarding the chemical properties of water, the main ones are:

Water is an incredibly small molecule compared to other types of molecules. It has a diameter of approximately 2.75 angstroms . It can also be measured as 0.27 gauge wide.

What kind of molecule is it

The water molecule is of the dipole type . Among its dipoles are attractive forces which are known as hydrogen bonds . In its molecule, the two electrons of the hydrogens are displaced towards the place where the oxygen atom is located , for this reason, in the molecule there is a negative pole where oxygen is and two positive poles. where the hydrogens are found.

How many atoms are there in a water molecule

The water molecule is made up of two hydrogen atoms and one oxygen atom.

Importance of the hydrogen bridge in the water molecule

Hydrogen bonding is very important in many chemical processes and is responsible for the unique solvent capacity of water. In the water molecule, all its physical , biological and chemical properties are controlled by means of these hydrogen bonds, which result from the polarity of the molecule. These hydrogen bridges have special importance in water molecules and for life in general on the planet , in them, water could melt at -100 ° C while it could reach boiling points that would be close to + 90 ° C.

It is through hydrogen bonds that the liquid phase of water can be denser than the solid phase , it allows the molecules themselves to exist and gives them the correct molecular geometry so that in this way the hydrogen atoms can stay together. to the oxygen atom.

This additional force that this type of bond gives in water is what holds the molecules together and makes the water stay liquid at room temperature , while other very similar molecules that do not form hydrogen bonds are gaseous . These hydrogen bonds also affect the solid structure of water: the bonds become stiffer when water freezes, giving the ice an overall more open and less dense structure.

What are the inner electrons?

What is activation energy?

What are non-metallic oxides?