In chemistry , it is possible to find a great variety and quantity of metallic or basic oxides as they are also known. This type of compound originates at the moment in which the combination of oxygen with a metal is carried out . They have the ability to react with water to form hydroxides in this way and are very common to find even in nature and everyday life. 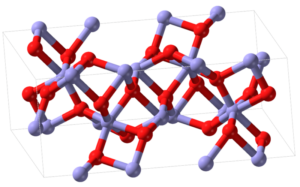 Metal oxides are a type of oxide that are composed of the union that occurs between oxygen and the oxide through an ionic bond that usually occurs when the temperature is increased or when the metal remains in contact with the air .

Among the main characteristics that can be observed in metallic oxides, the following are mentioned:

Its properties depend mainly on the metal and the way in which it can interact with the anion. Among its main properties are the following:

Metal oxides can be obtained at the moment in which a metal is reacted with oxygen . A good example of the production process can be seen in a metal that gradually rusts when exposed to water or air without any protection. They can also be obtained by means of thermal decomposition in which one or two molecules must be liberated from the original compound, be it a salt or a hydroxide.

Uses and applications of metal oxides

The uses and applications of metal oxides are abundant and in fact, they are used in various activities of daily life , mainly those that are related to the manufacture of chemical substances . Some, such as magnesium oxide, can be used in the pharmaceutical field to create medicines for the stomach and to make antidotes.

In its structure you can find a metal and oxygen which acts with an oxidation number of -2.

The general formula used to represent metal oxides is as follows:

Metal oxides are a bit difficult to name because the substances that make them up sometimes have different oxidation numbers. To carry out the nomenclature of metal oxides, the system known as stoichiometric or systematic is used and the STOCK system is also used . It is important to know that, in order to name them, the following aspects must also be taken into account.

When the metallic element has only one oxidation number then the following mechanisms can be used:

When the metallic element has two oxidation numbers , then the following mechanisms can be used to establish the nomenclature:

When the metallic element has three different oxidation numbers , then the following nomenclature mechanisms should be used:

Metal oxides are of great importance for man and for everything related to the field of industry as they are fundamental and necessary in many of the activities that are carried out daily. They also turn out to be the raw material in chemical laboratories because through them the different bases and compounds necessary for their proper functioning can be obtained.

Some examples of metal oxides are as follows:

What is a supercritical fluid?