What is the reason for salinity of sea water?

Sea water composition and salinity is listed here. You don’t need to understand more than a water cycle to understand why sea water is saline or salty. Simply put, the water cycle begins when fresh water falls from the sky in the form of rain and inevitably ends up in rivers, lakes, or oceans where it evaporates to form clouds and the same cycle is repeated over and over.

If we dig a little deeper into each stage of the water cycle, we’ll see how salt leaks into this mixture.

This rain is not 100 percent pure; rain water mixes with carbon dioxide in the upper atmosphere as it falls, giving it an acidic property.

Once it reaches the surface of the earth, the water moves through the land to reach the waterways.

As the water runs, the acidic property in which rocks sweeping ions from these rocks breaks into the sea.

About 90% of these ions are sodium or chlorine (as we know their salt formation forms). 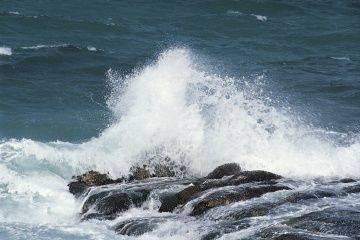 Fresh water that reaches the sea evaporates to form clouds. However, chlorine, sodium and other ions remain without evaporation and accumulate over time to give the sea its saline properties.

From the hydrothermal vents on the ocean floor there are quantities of dissolved minerals containing sodium and chlorine, which contribute to the formation of the cause of seawater salinity.

Surprisingly, the amount of salt formed from the flow of water through the rocks, and from the dissolved salts coming out of the openings in the ocean floor since its formation.

Decomposing salts constitute approximately 3.5% of the weight of the ocean water, if we can separate the salt from the sea we will get a layer of 153 m thick covering all the land on the globe, this means the height of a building of forty floors.

Still, the question remains: if water runoff is the cause of sea salinity, why not the example of lakes that are relatively salt free? For most lakes, water flows to and from them through rivers and waterways.

Salt ions that end up in the lakes are carried outside, which keeps the lake water fresh.

These ions end up in the oceans, which are somewhat “dumped” by the waterways and the salts they contain, which is the reason for the salinity of sea water.

Water bodies with no outlets – such as the Dead Sea and the large salt lake in Utah – maintain salinity levels that are sometimes equal to and greater than those of the oceans.

you may also look at

Water as a universal solvent