The  vitreous state  occurs in bodies that have undergone rapid molecular ordering to take definite positions, generally due to rapid cooling. These bodies have a solid appearance with a certain degree of hardness and rigidity, although under the application of external forces they generally deform elastically.

Glass, not to be confused with glass, is used in the manufacture of windows, lenses, bottles, etc. In general, it has countless applications, both for domestic life and for research and technology; hence its importance, and the importance of knowing its properties and characteristics.

Therefore, it is possible to obtain glasses that meet certain properties to meet certain technological or industrial needs.

With regard to their optical characteristics, these vitreous bodies are isotropic (that is, their physical properties do not depend on direction) and transparent to most visible radiation, in the same way as liquids.

Another state of matter

The vitreous state is generally considered as another state of matter beyond the three commonly known states, such as liquid, gas and solid, or new ones that have been discovered in recent decades, such as plasma or Bose condensate. Einstein.

However, certain researchers understand that the vitreous state is the result of a subcooled liquid or liquid with such a high viscosity that it ends up giving it a solid appearance without actually being one.

For these researchers, the vitreous state would not be a new state of matter, but rather a different form in which the liquid state appears .

They have no internal ordering

Ultimately, what seems quite certain is that bodies in the glassy state do not show a certain internal order, contrary to what happens with crystalline solids.

However, it is also true that on many occasions what is called an orderly disorder is appreciated. Certain ordered groups are observed that are spatially organized in a totally or partially random way. 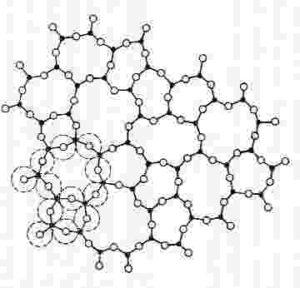 As already mentioned above, glass can be of natural or artificial origin. An example of a vitreous body of natural origin is obsidian, which is created by the heat present inside volcanoes.

Among the most common glasses that can be found, the following should be highlighted:

Silica is an oxide of silicon, of which in general the best known is quartz. In general, silica is a fundamental component of glass.

In the case of quartz, a quartz glass can be obtained by heating it up to its melting point (which is 1723 ºC) and proceeding to cool it rapidly.

Quartz glass has excellent resistance to thermal shock and can be bathed in water when it is red hot. However, its high melting temperature and its viscosity make it difficult to work with it.

This quartz glass is applied both in scientific research and in a multitude of applications for the home.

In addition to sodium, other alkaline earth metals are added in the manufacturing process to provide the glass with certain particular properties, such as mechanical resistance, non-reactivity against chemical agents at room temperature (especially against water), among others.

Likewise, with the addition of these elements, it is also sought to preserve the transparency in front of the light.

The chemical composition is usually expressed as percentages by mass of the most stable oxides at room temperature of the chemical elements that compose it.

In any case, some general properties of glass are:

An important advantage of glass compared to other materials is both its ease of recycling and its unlimited recycling capacity, since there is no limit to the number of times the same glassy material can be recycled.

What is chemical hybridization?

Thin-layer chromatography: characteristics, what it is for