As water freezes, it expands. So, ice has more volume (it takes up more space, but has less density) than water.

Why does ice have less volume than water?

The solid states of other liquids are denser because the molecules pack together tightly when the kinetic energy (temperature) decreases. The hydrogen bonds in water ice are indeed strong, but their orientation causes molecules to push apart, actually lowering density. 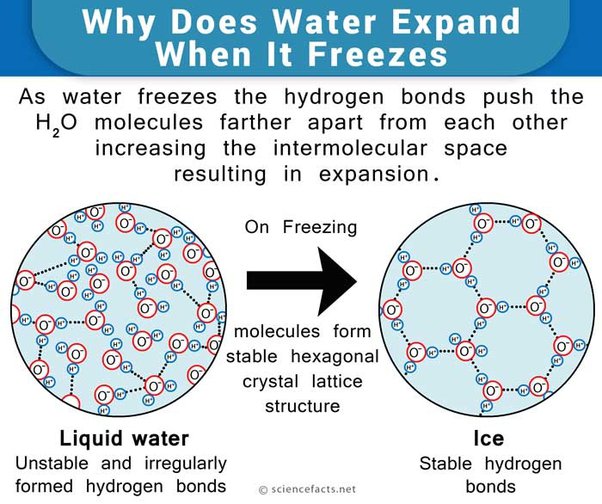 Ice occupies more space than water why? The pipes burst with a frost stroke reminds us of it every winter: ice occupies a larger volume than liquid water! An amazing feature that can be explained at the atomic level.

In the vast majority of cases, the solid state of a body, where the molecules are more ordered, occupies less space than that of the liquid state. For water, it’s the opposite.

The physicists call this an ” anomaly dilatometric”. Some rare compounds also present this anomaly:

The density of the ice is 0.91 g / cm 3 while that of the liquid water is 1 g / cm 3 . This drop in density explains in particular that the ice floats on the water.

Ice takes up more space: the fault with hydrogen bonds

The dilatometric anomaly is explained by the particular structure of the water molecule H 2 O, consisting of two hydrogen atoms bonded to an oxygen atom. Indeed, the oxygen atom is negatively charged and the atoms of hydrogen are positive. The water molecule is therefore a polarized molecule.

This strong polarity makes it possible to create bonds, called ” hydrogen bonds “, between the oxygen atom and the hydrogen atom of a neighboring molecule. In ice, water molecules held by hydrogen bonds combine in a network of hexagons that leaves a lot of vacuum: ice takes up more space than liquid.

Hydrogen bonds are also found in liquid water but in a less stable manner. Moreover, this gives the water a high vaporization temperature (about 100 ° C) for such a small molecule (for comparison the H 2 S vaporizes at -60 ° C for example), and it is the reason that liquid water exists on Earth at room temperature, and therefore life has developed!..

Where does gasoline come from?

Where does gasoline come from?

How do you convert kelvin to celsius?

What are the Facts about oxygen?

What is HCl used for an overview?

What is pH scale?