It is a colorless or white crystalline solid. It is very soluble in water and absorbs it easily from the environment, which can be seen in the figure of the wetted solid shown below.

The zinc in this compound is biologically very important for humans, animals and plants , as it is involved in basic functions such as protein and fat synthesis.

For this reason, ZnCl 2 is used as a nutritional supplement for animals and humans in cases of zinc deficiency, and as a micronutrient for plants.

It has bacteriostatic and astringent properties, and is widely used for these purposes in both human and veterinary medicine. It also eliminates pests such as fungi outdoors and is an intermediary for obtaining pesticides.

Among its many uses, it is used to treat cellulose and wool fibers in various processes, as well as to prepare them for coloring or printing. It also slows the combustion of wood.

ZnCl 2 is an ionic compound formed by the Zn 2+ cation and two Cl – chloride anions  that are joined by electrostatic forces.

The zinc (II) ion has the following electronic structure:

in which it is observed that it lost both electrons of the 4s shell , so the configuration is stable.

The chloride ion has the following structure:

which is also very stable because it has complete orbitals. 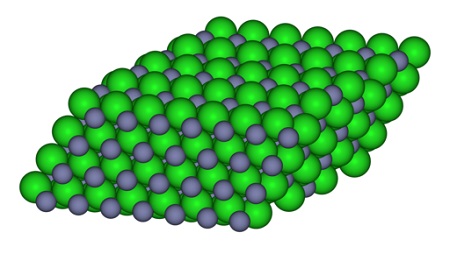 It is a hygroscopic and deliquescent compound, because in contact with the humidity of the environment it absorbs a lot of water. In water it hydrolyzes and has a tendency to form an insoluble basic zinc oxychloride salt.

It is mildly corrosive to metals.

It is not flammable.

Biologically, zinc is one of the most important elements. It has been recognized as essential for all forms of life.

In the human body, ZnCl 2 provides Zn, which is essential for the synthesis of proteins, cholesterol and fats. Zinc in particular is important for the proper functioning of the immune system.

More than 25 zinc-containing proteins have been identified, and many of these are enzymes, necessary for cell growth and division, and for the release of vitamin A from the liver.

Commercially, this compound is prepared by reacting aqueous hydrochloric acid with scrap, zinc waste or with the mineral that contains it. In this reaction, hydrogen gas (H 2 ) is also produced.

It is a mild antibacterial or bacteriostatic, so it is used in vaginal douches to eliminate trichomonas or haemophilus infections. It is also used to treat corns, as an astringent and in chemosurgery in skin cancer.

It is used as an astringent in some cosmetics such as refreshing skin lotions.

As a nutritional supplement

Due to its importance in various functions of the human body, ZnCl 2 is administered orally as part of nutritional supplements and also in people who require parenteral nutrition.

ZnCl 2 supplements are given to treat zinc deficiency in individuals who suffer from inadequate nutrition, have poor intestinal absorption, or a condition that increases the loss of this element from the body.

Healthy individuals acquire it through food.

It should be given at least 1 hour before meals or 2 hours after them, as some foods can prevent their absorption. In patients who have irritation in the stomach after ingesting the supplement, they should take it with meals, but in this way the zinc will be less bioavailable.

Its solutions have been used in animals as a caustic agent to burn or cauterize fistulas, which are connections between organs that are neither normal nor healthy; In the form of a paste, it is used to treat ulcers and in cancer chemotherapy.

In eye infections, a very dilute solution of this compound acts as an antiseptic and astringent.

It is also used as traces in animal feed or as a food supplement.

The reaction between ZnCl 2 and ZnO in water produces some zinc oxychlorides that make up an extremely hard material or cement. The main constituents are 4ZnO • ZnCl 2 • 5H 2 O and ZnO • ZnCl 2 • 2H 2 O.

This type of cement resists the attack of acids or boiling water. However, the pentahydrate is very stable and insoluble but not very workable, and the dihydrate is more soluble and can cause fluid drainage.

For these reasons these cements have few applications.

It is a Lewis acid and catalyzes Diels-Alder reactions. It is also used as a catalyst in Friedel-Crafts reactions, to make dyes and colorants, and in the manufacture of polyester-polyether resins.

A reaction involving this compound is shown below:

It has been used as a herbicide in crops, as a foliar treatment, to eliminate pests such as fungi and moss, and as a micronutrient. It is an intermediary to prepare pesticides.

It is used in mouthwashes, however the recommended contact time is very short, so it only acts as an astringent on the oral mucosa. It serves as a desensitizer, is used in toothpastes and is part of dental cements.

In the textile and paper industry

It is an ingredient in the solvent used in the manufacture of rayon or artificial silk from cellulose. It is a crosslinking or bonding agent for finishing resins on textiles. It also serves to treat them and promote their conservation.

It allows curling fabrics, separating silk and wool fibers, and acts as a mordant in printing and coloring textiles.

It is used in the manufacture of parchment paper and to produce crepe paper.

In the preparation of nanoparticles

By reacting zinc chloride with sodium sulfide (Na 2 S) by a sonochemical method and in the presence of certain organic compounds , zinc sulfide (ZnS) nanoparticles are obtained. Sonochemical methods use sound waves to trigger chemical reactions.

This type of nanomaterials could be used as photocatalytic agents to produce, for example, the division of water into its components (hydrogen and oxygen) through the action of light.

May cause burns to eyes, skin, and mucous membranes.

When heated to decomposition it emits toxic gases of hydrogen chloride (HCl) and zinc oxide (ZnO).

Warning on its use as a drug

Although conclusive studies are lacking, it is estimated that if this compound is administered to pregnant women it can cause harm to the fetus. But the potential benefits might have more weight than the possible risks.

What is a double covalent bond?